2 January 2022. Volume 5, Issue 1
What does 2022 hold for cyber and the world?
Join hundreds of subscribers who get this first, every Sunday. Subscribe

Certain characteristics define our world — physically and digitally — and shape events within those spheres. Those might be (very) slow-moving, such as geography, or faster moving social or technological changes. These set the conditions for our environment (and more specifically cyber threat landscape). Even with the fastest moving of these trends, you are unlikely to notice a fundamental difference from one year to the next.

Reviewing these again, I think two are broader trends, that I think are still relevant:

While the following two are a bit more specific and worthy of some change or retirement:

Updated themes and things to consider

So, in addition to Internet sovereignty and continuing importance of privacy and trust, what else is setting the stage for 2022 and beyond? 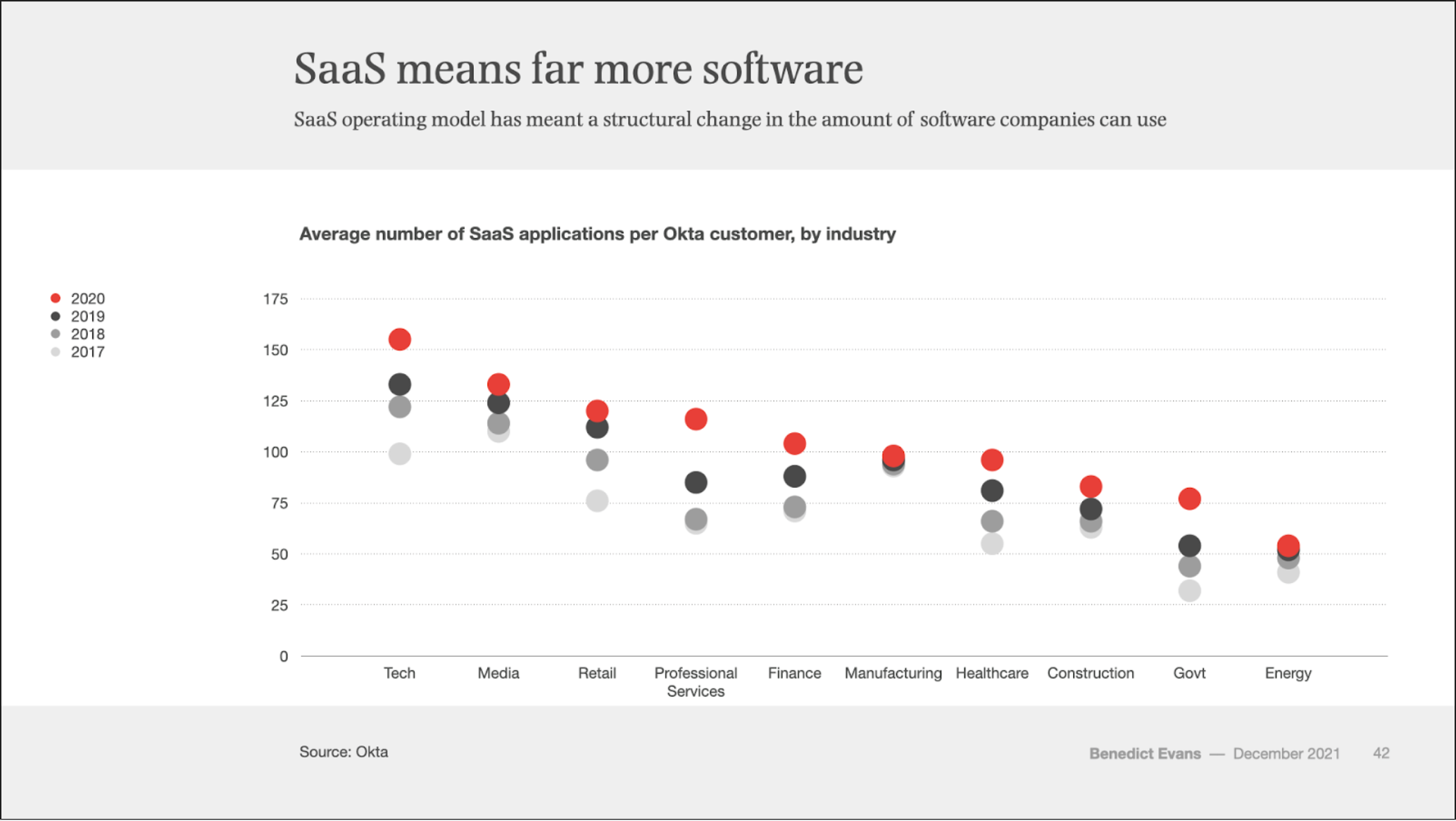 The number of SaaS applications used in organisations is increasing in every sector (source: Ben Evans/Okta)

I had hoped to spend more time on these through December and bounce them off a few folks, however, last month was incredibly busy for Cydea and they have been written… today. The inter-connectedness of digital transformation, cloud, APIs and commercialisation/consumerisation are closely intertwined and I’m not entirely happy I’ve sufficiently decomposed them, yet! If you’ve got some feedback on them, drop me a DM, because I will likely be revisiting them in the coming weeks.

As I’ll cover below, supply chain and ransomware predictions were pretty sure-fire things to occur in 2022 (I’ll be more specific this year). Beyond those, I identified three other, more specific things that I thought would come to pass:

I would say ‘not bad’ — all of them correct — though in hindsight I think the bad was less in the accuracy as it was in the precision. I must do better here!

Taking a leaf out of Tony Martin-Vegue’s (tonym-v.com) far ‘smart’-er predictions, here three things I think will come to pass in the next 12 months, and all of which should be verifiable by government announcements or press coverage:

What’s everyone else saying?

If you’re looking for a broader look at what cyber security vendors are predicting, Paul Brucciani publishes an annual review of the main sources, and this year he’s analysed 175 predictions. Also, having built up a useful data set, he takes a look back at 2021’s predictions and how effective these vendors are at making predictions. Some really interesting observations - thank you, Paul! linkedin.com

3.8% of ‘strategically aged’ domains (left dormant for a long period) are malicious, and a further  19% are suspicious, according to new research from Palo Alto Networks who say that these aged domains are  3x more likely to be malicious than newly registered domains bleepingcomputer.com

The folks at The Record and Bleeping Computer seem to have been working through the holidays - lots of content from them this week!

Microsoft has released a script to help get things moving again.