26 September 2021. Volume 4, Issue 39
'Releasing the hounds' on ranomware actors, though FBI involvement in Kaseya shows offnseive operations may already be underway.
Join hundreds of subscribers who get this first, every Sunday. Subscribe

America needs to ‘release the hounds’ on ransomware

“America Is Being Held for Ransom. It Needs to Fight Back.” Says CrowdStrike co-founder Dmitri Alperovitch in a New York Times op-ed piece this week.

Citing a lack of evidence that diplomacy is yielding any results on ransomware, and previous successful campaigns disrupting and degrading the Islamic State’s ability to operate in cyber-space, Alperovitch suggests that “purely defensive strategies will fall short,” and that “the task is too big” to expect every hospital, school, and small business to be able to defend itself.

There is some evidence that perhaps, on the down-low, a more offensive stance maybe being taken. During the Kaseya ransomware attack there was speculation that the company may have paid the cyber-criminals to obtain a decryptor for customers, but this week The Washington Post reports that the key came from the FBI, who had infiltrated REvil’s operations and has been monitoring the group.

The process of weighing the benefit to victims against compromising the long-term FBI operation resulted in a delay of 19 days, sparking debate and one victim to point out that complete restoration was already well underway by that point and “the decryptor key would have been nice three weeks before we got it.”

Meanwhile, the BlackMatter group attack on farming services provider New Cooperative - that may cause shortages in grain, pork and chicken - shows us that ransomware groups have similar ‘equities’ decisions to make: negotiations between Black Matter and New Cooperative show differences of opinion on what constitutes ‘critical infrastructure’.

BlackMatter is demanding $5.9 million to provide a decryptor to New Cooperative, who say their software is used in the production of 40% of the US’ grain and to schedule the feeding of 11 million animals.

1/3 people have tried to guess someone else’s password and of those 3/4 have succeeded, according to Beyond Identity (shout out Gary!) zdnet.com

Kim Zetter has an interview with David Evenden, a formal NSA employee, recruited to conduct cyber operations by a United Arab Emirates intelligence service, hot on the heels of charges being brought against three other former US intelligence employees by the DoJ last week (vol. 4, iss. 38).

Headhunters offering high salaries played a part in attracting him to the role, though he acknowledges that he was naive about the intentions and ‘red flags’ on some of the interview questions (concerned with compromising windows environments, rather than tracking terrorists as originally described) were present in hindsight.

As an industry, infosec has focused a lot on building technical skills and less on the ethical and responsible use of those skills. This has resulted in many people in the same shoes as Evenden who’s talent has resulted in developing impressive technical capability in a much shorter time than it takes to develop a rounded world view on what’s being asked of them.

Are cynicism and arrogant naivety the same thing?

Apple and Google removed an app created by opposition to Vladimir Putin’s United Russia party to coordinate ‘smart voting’, allegedly after threats of prosecution of their Russian staff, that shows concerns over how different technologies, such as Apple’s child sexual abuse material (CSAM) detection algorithm, are valid (vol. 4, iss. 32).

Ultimately tech (and other) companies can either comply with local legislation (regardless of public perception over how legitimate or dubious requests may be) or cease operations and pull out of a market alltogether.

It’s been a bad week for Apple:

“Stick your ransomware in your ass”

Ransomware negotiations conducted in public can provide insights into the tactics of groups. One victim had very little left to give: 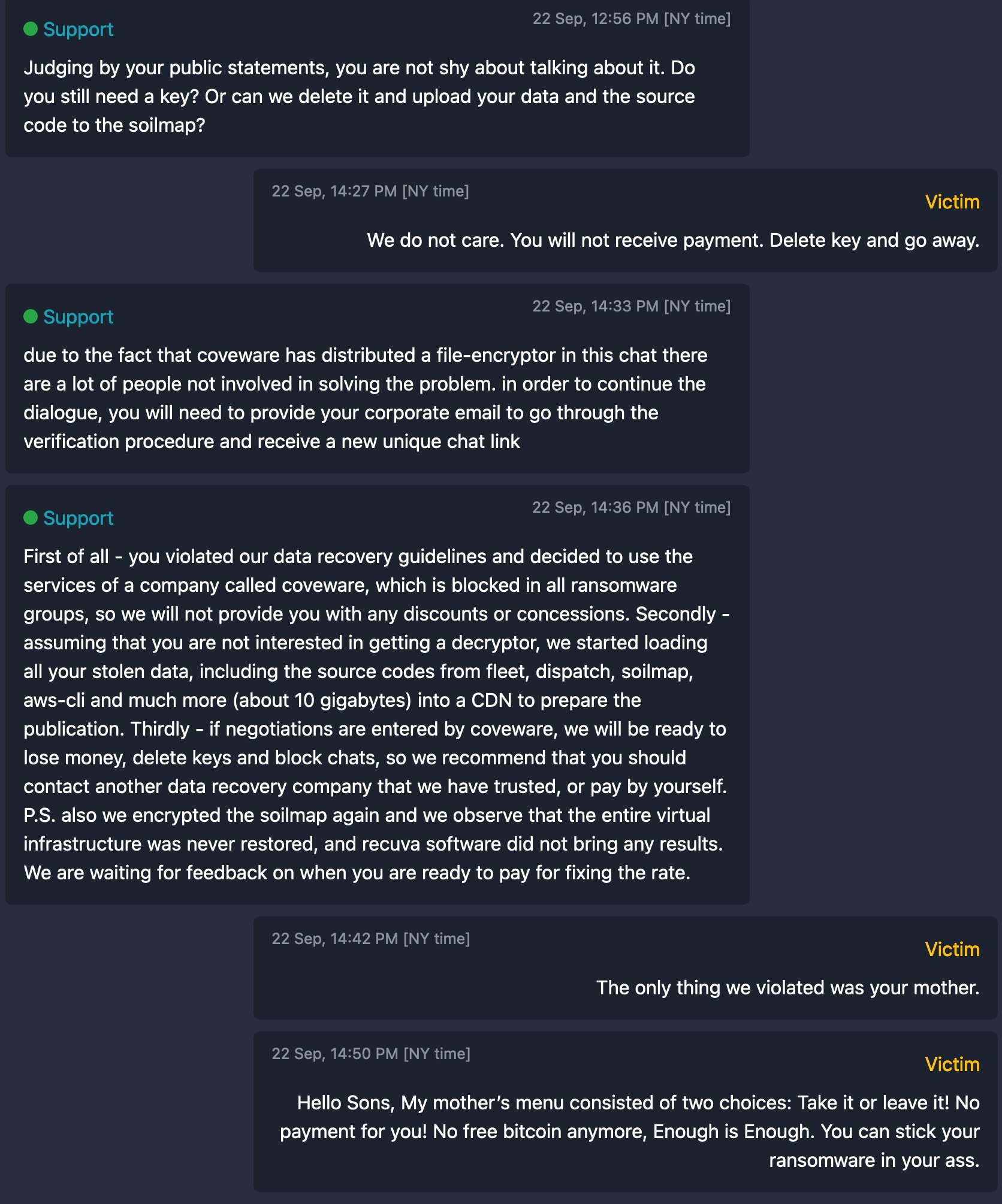