19 June 2022. Volume 5, Issue 25
Looking back over the last four years. US and UK proposed data protection changes. Interpol announces arrests of 2,000 scammers.
Join hundreds of subscribers who get this first, every Sunday. Subscribe

This week marks the Fourth Birthday of Robin’s Newsletter! It’s the 209th Sunday on the trot I’ve pulled together the ‘need to know’ security news, stats and thinking from the last seven days. By the time this lands in your inbox I’ll be enjoying an Arran Distilleries single malt from my recent trip to Scotland. So join me in raising a glass (or mug if you’re reading this on Monday morning) and let me know why you subscribe on LinkedIn or Twitter. Thank you for subscribing and sharing with your networks.

Inspired by Anthony’s question on LinkedIn, I’ve taken a look back over the four years, what the themes have been and how things have changed. I’ve consciously tried to write a summary, rather than a lengthy (series) of blog post(s).

It’s hard to avoid ‘the r-word’. Ransomware has evolved significantly from simplistic, automated attacks against individuals to a more complex and sophisticated ecosystem of operators. It has regularly dominated trade and national press with increasingly audacious attacks against large corporations, critical infrastructure, and even a whole country. At least one person has died as a direct result of cybercriminals’ financial greed. Double extortion schemes are designed to amplify pressure, as are tactics to notify individuals and mobilise them against the victim organisation.

The headlines play to availability heuristics and recency biases — and the consequences can be extreme as I’ve said — however in absolute terms there are only so many bad guys and policymakers and law enforcement are getting better at identifying perpetrators and gathering evidence against them: cryptocurrency was seen as anonymous four years ago; now it’s obvious that having a public ledger of every transaction gives great insight into illicit schemes. Cooperation is increasing and it’s great to see thousands of arrests across tens of countries regularly making the headlines.

Supply chain security has gained interest but I was writing about it since the first edition. Businesses are complex and digital transformation is accelerating the pace of everything. A seemingly simple banner, these issues manifest in many different places: the provenance of software, the consolidation of cyber risk in commodity service providers and decisions to trust outsourced providers with business processes and reputations all have a bearing on cyber resilience.

We’re still trying to work out what is ‘normal’ for nations in cyberspace. Cyber has proven to be an important part of force projection in support of national interests. It’s also been used to gather intelligence and source content for information warfare (aimed at manipulating public opinion, rather than cyber warfare seeking kinetic results). This is also driving the ‘Balkanisation’ of the Internet as authoritarian regimes seek greater control over how people communicate, what information is available and manage foreign dependency.

Privacy and data protection have cut through to the mainstream. Landmark regulations like the EU’s General Data Protection Regulations (GDPR) and the California Consumer Privacy Act (CCPA) have raised awareness and enshrined the rights of individuals to how their data is used and protected. The balance of rights between the individual, national security and business interests hasn’t been found yet. In fact, there are two major announcements on the regulation of personal data just this week from either side of the pond.

Surveillance crops up repeatedly in the individual privacy sense and often gets conflated with the government three-letter agency sense of the term. The former is more concerned about targeting adverts at you (in a manner that probably harms the traditional press more than it harms an individual). Progress is being made here as we work out what is, and isn’t acceptable behaviour. An interesting question will be if we care where these decisions are made: in Google’s cloud, or on the iPhone in the palm of your hand? The adoption of digital communications has been a blessing and a curse to the latter. Never has so much information been right there in front of intelligence agencies, but tantalising out of reach thanks to end-to-end encryption. The ‘crypto wars’ and calls for encryption backdoors have moved from national security interests to emotionally charged pleas to curb child sexual exploitation. Child sexual abuse material is a nexus that joins these two different strands back together, with questions over Apple’s proposal to have on-device scanning for CSAM.

The meta-narrative here I think is this huge shift in how and who we can communicate with and what we choose to say. Today, 5 billion people are online. As we grapple with the scale and pace of that change and the full spectrum of the human condition, Carl Sagan’s Pale Blue Dot rings in my ears. “To me, it underscores our responsibility to deal more kindly with one another, and to preserve and cherish the pale blue dot, the only home we’ve ever known.”

Data protection policy developments on either side of the Atlantic this week:

67% of CISOs say their information security budget has increased since last year (12% say it has more than doubled), while 30% report that their organisation doesn’t want, or can’t get cyber insurance coverage, according to ClubCISO clubciso.org

‘People, process and technology’ is a staple information security triplet. Despite the received wisdom of achieving balance, focus amongst these three almost always prioritises technology (preventative, detective or corrective solutions) and people (through training). Process is oft-forgotten. Mario Platt’s been championing the importance of building secure, usable processes for some time now and, in his blog post, this week raises the ethics of your business process design.

Processes usually protect the organisation’s interests, with some focus on protecting customers from harm too. Mario’s third dimension is around protecting the employee from personal liability. 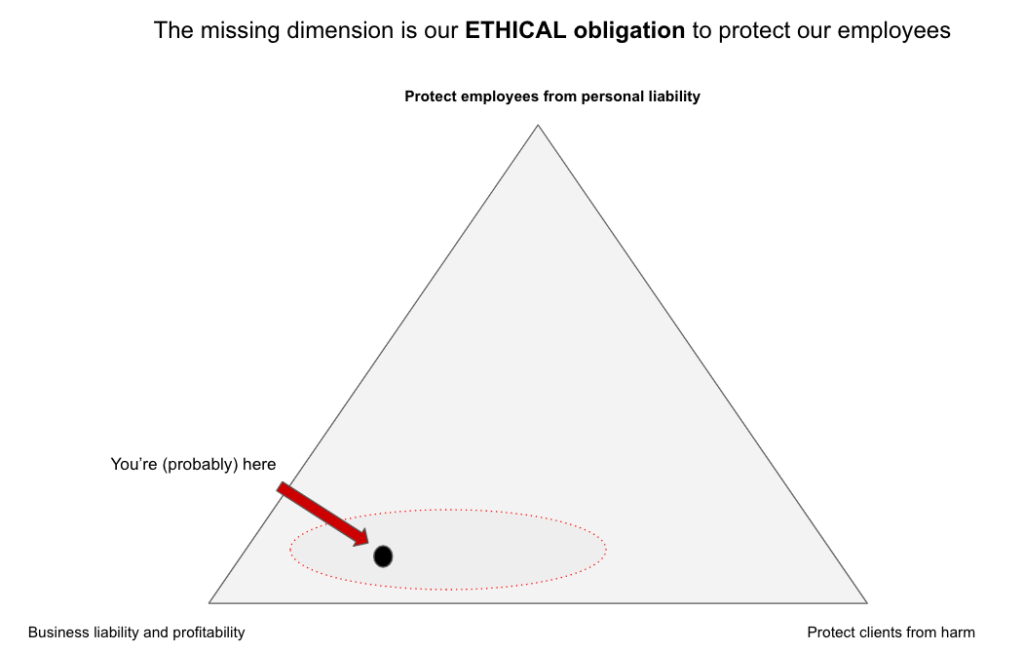